The temperature keeps on rising! I’m so excited to play my first gig with my new backing band at Sound in Liverpool on the 24th of November, supporting the incredible  ‘HANOVER‘ and ‘Weekend Wars’ (and I’m not just saying that)! 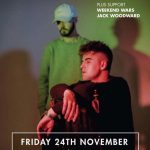 Tickets will be available very soon from See Tickets!

I’ve also had ‘Higher’ included in Fresh on the Net’s fresh faves this week, which is a huge honour from the BBC 6 music presenter ‘Tom Robinson’s blog. I like what he said so much that I’m going to include the whole review below!

”If there was an award for the song in this week’s Fresh Faves that is most likely to be a Top 40 hit, then I would be bestowing said award on North West artist Jack Woodward for his song Higher. It’s a finely polished piano-led single with one of those euphoric choruses that has a quasi-spiritual feel to it. If you’re a fan of the ivory-botherings of Tom Odell, or are looking for a less gravelly version of Rag N Bone Man, then you’ll find something to like in Higher.”

+ it was ‘song of the day’ for Songwriting Magazine on Friday! + had its first broadcast on Channel Radio!